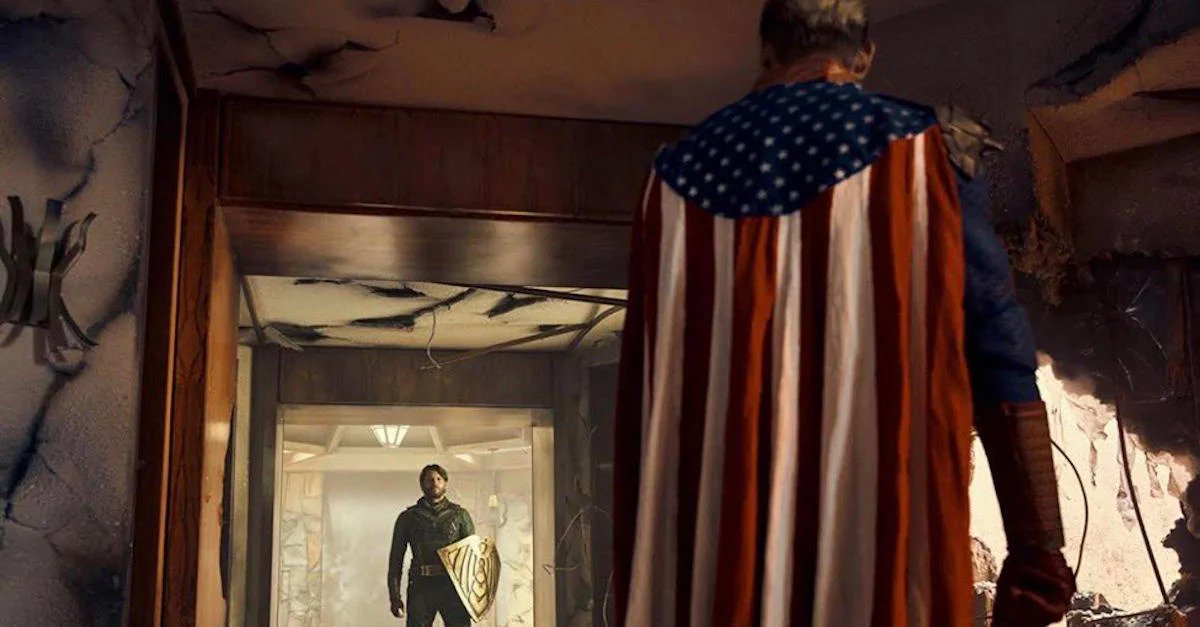 We finally got to see the Boys episode Herogasm. Many people expected the highlight to be the outrageous sex as shown in the comic book. Instead everyone is talking about the fight between Soldier Boy, Butcher and Hughie vs Homelander.

Already a youtube video showing the fight is over a million views in less than a day. It’s no doubt that the episode and this scene was highly anticipated. The Boys is known for its untraditional take on the super hero genre. For them to deliver a fight where powers were used traditionally may come as a surprise. This fight was different and unique from other fights in the superhero genre. What makes it unique is something that the super hero genre, and movies and television in general can learn from when crafting a fight scene.

The buildup to this fight stretched from the beginning of the season. Since the beginning, the boys were looking for a weapon to kill Homelander. It was mentioned by the former vp of Vought that he never saw Homelander sweat before. All of this played to the question of can Homelander be beaten, and who is stronger him or Soldier Boy. Our anticipation to the answer of that question was met when it came to this fight.

The buildup didn’t just start from this season. From the beginning of the series, Homelander has been shown to be invincible and also a terrible person, causing many people wanting to see him get beaten up and for Butcher to get his revenge. Even recently, there was a fanmade video of Omniman vs Homelander which of course Omniman destroyed him.

Even in the dialogue in the episode especially right before the fight. We can feel it getting tense when Homelander arrived to the house, when he and Soldier Boy briefly talked.

With all this buildup to this single moment and fight, it causes the audience to be engaged. It’s kind of like when Thanos fought against Captain Marvel for a brief moment. For over a year people wanted to see who would win.

When there’s a fight between 3 invincible people, it may be hard to find any point in it, as nobody can get hurt. We’ve seen this from movies like Man of steel, to xmen 2, and many more. Having characters who can’t be hurt fight each other, can come off as pointless, dull, and just a big cgi battle. However, the boys was able to avoid this problem. Yes Butcher, Soldier Boy, and Homelander are invincible. But the fight showed that Homelander is slightly stronger against them on an individual level, one on one.

They’re bulletproof, and it’s going to take more than a few punches to damage them, but by showing how Homelander is stronger than them, it adds the stakes because now we know they’re fighting for their lives. Even when Homelander fought all 3 of them, the danger now was put on Homelander as he became outmatched. These stakes increased definitely when Hughie jumped in since we know he isn’t invincible, so he’s fighting for his life as well.

It’s the difference between wolverine and lady death strike fight scene in xmen 2, and wolverine’s fight scene with weapon x in logan. In xmen 2, they both are at full power. But in logan, wolverine is old, and was able to be hurt. This is why there was tension, audiences were at the edge of their suit unnerved. They couldn’t relax for one moment, because at any point, weapon x could mortally wound and kill wolverine.

Invincible did a great job at this as well. Adding stakes to the fight by showing that the characters can be hurt or outmatched even if they’re both strong, is a great way to make a fight scene engaging.

The Story through the fighting

When you think of a fight scene, you may think of two people fighting, and it only matters at the end on who comes out the winner. Everything between is just for entertainment and spectacle purposes. Like dialogue, fight scenes and violence are meant to tell a story.

With this fight scene we saw a story through the facial expressions and the choreography. Just like when Thanos fought the hulk, the way he fought told a story, that he isn’t a brute, but a master technician with hundreds of years of experience which is the main reason he could beat the hulk rather than brute strength alone.

In the boys, Butcher looks confidence when Homelandeer arrives because it’s him and Soldier Boy vs Homelander. We see how Homelander isn’t fazed, and neither is Soldier Boy, even thinking Homelander is a joke. After the first contact where Homelander flies Soldier Boy into the wall, Soldier Boy smacks down Homelander’s hands and upper cuts him with the shield. This shows that Soldier Boy is more than just someone with powers, but he can fight hand to hand. We see a little bit of this from Hoemlander throughout as well, but he still mainly relies on his brute strength. From Soldier Boy dodging the blows as well, we see how well he can fight.

When Homelander blocks Soldier Boy’s fist, we see SB’s surprise that someone is stronger than him. Homelander is confident, slightly stunned but overall confident as he grins. That is until Butcher gets up and hits him with the heat vison. Now Homelander is shocked almost scared that Butcher has powers. Homelander storms in full of rage, and Butcher using his fighting skills, is standing toe to toe with Homelander. Even when Homerlander punches Butcher, Butcher smiles showing he can take it and actually likes it.

This extends when they both use their heat vision in which Soldier Boy pulls down Homelander’s cape, showing his awareness and how having a cap is ridiculous. And when Hughie shows up, we see the look on Homelander’s face, not much of fear but surprise as well as annoyance.