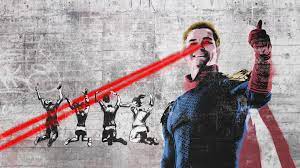 Amazon Prime’s The Boys is no doubt a great tv show. It excels for the super hero genre, and for tv in general. With its alternative take on the super hero genre, it has found much success critically and commercially. Although it’s easy to compare it to Marvel and DC, the show is great on its own. It does what typical super hero stories don’t do which is why it’s the perfect superhero story for our time.

The premise of The Boys already breaks expectations. It takes place in a world where super heroes are corporate employees, in the spotlight, and many times act in a not so noble manner. This causes a group of humans to keep a watch on them to keep them in check. By nature, the show breaks convention in the super hero genre. For a first time viewer, there’s an expectation for the show to be different.

Nevertheless, the show goes beyond in breaking expectations just in the first episode. The speedster A-train accidently kills Hughie’s girlfriend when she steps into the street, and at super speed, he runs into her, completely destroying her body. This is shocking and also thought provoking because it makes viewers confront the reality of having super speed. We see how that power isn’t all fun and games if used in the wrong way as the effects can be deadly.

Soon after we see The Deep who is supposed to be a hero, use his power to force Starlight into giving him oral sex. This once again is shocking and thought provoking. We share the same shock as Starlight to see some guy especially a super hero whip out on her. It’s thought provoking because we see how someone in power can use it to take advantage of someone who has less power. It makes us question if that’s how a superhero would really act in real life.

With all this shock in the 1st episode, it appeared that the one thing that would be consistent with the tropes was the Superman like character Homelander. He seemed noble and nice. While all the other heroes had major flaws, he seemed just like Superman. That was until at the end of the episode he shot down a plane killing the mayor and his son. With that act alone, it solidified Homelander as evil person, and an eviler person to be able to hide it under a nice persona. Within the first episode, the Boys left us engaged and shocked, something that followed throughout the entire series.

It’s been said, that the hero is only as good as their villain. The better the villain, giving a hard challenge to the hero, the better it makes the hero. Nobody wants to see a hero triumph easily, we want to see them struggle to obtain their goal. The better the obstacle, the better the character. What better obstacle for a group of heroes than having no super powers and having to go up against super heroes. Those are unbeatable odds. The Boys are outmatched in terms of physical capability. Not only are they going up against discount Justice League, but the super heroes have the backing of the biggest company on the planet, Vought. It’s like if a few black ops CIA people and a comic book nerd had to take down the Justice League who is funded by Disney. We know the odds are against The Boys, so it makes us engaged to find out how in the world will they defeat their enemies.

When copying something, it’s important to not do it in a way that makes it look cheap. The Boys take from other comics. Homelander-Superman, Queen Maeve- Wonder Woman, Black Noir – Batman, The Deep – Aquaman, and so on. Outside of super powers, the supes in The Boys are nothing like their Marvel and DC counterpart in character. From this, it becomes more of a parody and satire of super heroes rather than a copy. The satire extends to American culture from celebrity worship, to politics, the media, religion, and the military. The Boys takes elements of fiction and real life and blow them out of proportion while also showing the reality of them. We love the satire because it pokes fun at institutions and traditions we normally hold dear.

The original comic of the Boys was created in the 2000’s. The tv show debuted in Summer of 2019. At the time, the super hero genre was running high like it is now. In 2019 particular, was a great year for the genre in term of commercial success. Avengers Endgame, Captain Marvel, and Spiderman: Far From Home, Shazam, and many more super hero movies were release. With the super hero genre running rampant, it created a need for a different approach from it.

At the time of the release of the Boys, there weren’t anymore big super hero releases. This created a void that the Boys were able to fill perfectly. Taking people’s want for super heroes as well as the need for something different, The Boys was able to find success.

The tv show in many ways is completely different from the comic book. One thing the comic book was known for was its grotesque and ridiculousness. Although toned down for the tv show, the show still has those elements in it. From the outrageous sex scenes, to the violence; the absurdity of the Boys is something that everyone can laugh at. It’s a great mixture of super heroes with black comedy.

People usually say The Boys is what would happen if super heroes were real. That corporations would exploit them and thus creating supes that are drunk on power. This doesn’t take in consideration of Vought being an evil business. They kill politicians and people to hide their mistakes. The supes in The Boys aren’t just supes who come across their powers. They were handpicked at a young age and nurture to become super heroes. With so much backing and expectations, it’s very easy for them to grow up and abuse that power.

This is not as simple as saying The Boys is what happens when there are super heroes in real life because there are many factors that caused the Supes to behave how they do in the Boys. What separates heroes like Superman, Batman, Wonder Woman, and Captain America from their counterparts in The Boys, isn’t just a supposed realistic take on them. It’s their origins and their needs. Superman was raised by loving and caring parents. Homelander was raised in a lab by abusive scientists employed by an evil company. Batman is a billionaire CEO who runs his parents’ company, Supes in the Boys’ universe depend on Vought, so they’re owned by Vought.

This isn’t denying the lure of corporatism if super heroes were real. There’s no doubt that a company would try to commercialize the Justice League or Avengers. However due to each individual hero’s character and personality, and their upbringing, it won’t go exactly how it is in The Boys.

If super heroes were real, it could be a mixture of elements: good ones, bad ones, and much more.

It’s like what they say in The Boys. When a person takes v and gets powers, it doesn’t make them a good or bad person, it just heightens whoever they already are. It comes down to the person.